I was journaling this morning, and thought that I might share the story here. It is extremely personal and I hope that you do not mind.

This event happened exactly 3 years ago, next week and I learned a tremendous lesson from the events.

On the Friday afternoon,(2019) I was walking around Bob Woodruff lake with Larry. It was the most beautiful October day. The lake was calm and we were chattering about nothing, just enjoying being together. Then my phone rang. It was one of my DRs, a radiologist whom I have known since 2012 when she diagnosed my first breast cancer. Here she was again. She asked if I was sitting down…my heart stopped.

A blip on the screen, from my most recent mammogram was indeed malignant. (different breast and different cancer from my first cancer episode) I had gone through the usual song and dance. Sonogram, biopsies, more mammograms and now, the diagnoses.

The next day, Saturday was dreamlike. Even now, looking back. I know that Larry was sick with worry…and we decided to just be as normal as we could muster that included going to church the next day. That is exactly what we did, although I do not remember the sermon or anything particular. This was so very different than my breast cancer in 2012. I was scared to death.

That Sunday evening was stormy. I remember my daughter Jamison calling that night to tell us that their power had gone out, husband Jared was out on duty as a Dallas Police Officer and the tornado was tracking across Dallas heading for her apartment. It was a very frightening time for her and the city.

I felt strange, how can a person worry about a tumor when tornados were tearing apart the city?

Then our power went out. A huge BOOM followed….a giant limb from the old pecan tree came flying through the guest room ceiling. The next thing I knew, Larry was outside with the ladder in the storm, tarping up the roof, with the huge limb sticking out. He looked like Michael Landon from Little House On The Prairie. I cried.

I was undone. Overwhelmed is not enough of a word.

The next morning, I told Larry that I was going to reach out to the new minister at our church. I needed to talk to someone. Larry agreed. I called the church leaving messages and texted the minister and then waited.

Later in the day, we got in the car and drove to our insurance company’s office. We had never been to the office before, and by chance, our Insurance Agent was there. The storm had been bad and this man had been working most of the night. His name is Christopher.

Christopher was amazing. He took the time explaining everything and walked us though the steps, sharing each thing and in the order that it would happen as they would take care of our sweet cottage with the hole in the roof/ceiling. Then I totally broke down.

We found out then, that our wonderful Insurance agent is also a pastor at a community church in our city.

So. The house started repairs and I started surgeries and cancer treatments. It was a bad time for us. I thank God every day for Larry and my daughters.

We heard that a friend of ours from church had passed away and went to the funeral.

It is then saw the minister. She shouted TOLBERTS! We have not seen you at church lately! How are you?

She had not a clue what we had been going through. We did not tell her that day, but told her later.

If I was a minister and found out that I had let someone down, when they needed me, I would apologize. But I waited.

I learned that, God is there. When you need Him, He is there. It may not be the situation as you hoped it would be but He is there. I can still feel my heart calm as Christopher, our insurance agent prayed one of the most important prayers of my life.

I also learned that, when someone reaches out, never put them off. I try to be present, in that moment.

So, as this crazy world continues to spin around, I will always try to be the prayer that someone needs.

Team Believe~ Breast Cancer Awareness~ I fought cancer in 2012 and again in 2019 ~early detection is the key to survive. 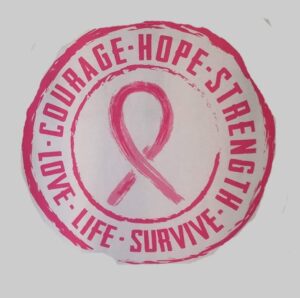